Quest for Bricks blog launched March 10, 2012 as Quest for Castle and has subsequently gone through a number of makeovers and updates. As I recently made some updates, I decided to do another post on the longer progress as well.

For most of my readers this may be merely housekeeping of little importance, but a few words on why I think this matters. Of course, this past year and a half have been an exercise in blogging and some changes stem from the desire to blog better. But that’s not the only reason. As I wrote in my article Why do adults build LEGO?, my AFOL journey has been full of the questions why and how best to proceed. My interest in LEGO comes natural, but the ways to best pursue those interests as an adult is a puzzle. My adjustments to the blog reflect that journey as I take tentative steps into different directions and then adjust as I see fit.

For example, the first Quest for Castle design was deliberately very “small”. It was almost like a diary, because initially all this was going to be is a diary of me recreating the 6080 King’s Castle. That turned out to be, indeed, too small. Then as the castle nearly finished and I got to make other LEGO related discoveries during the summer of 2012, I broadened the blog to Quest for Bricks and came out with perhaps a little too daring grid design, better suited for higher volume blogs than mine would become. I later toned down this design a couple of times to better suit my intentions and realities. The blog once again became a little smaller, but still larger than initially. The design also moved away from grey Castle towards more color.

Another thing is the blog categories I have developed over the year and a half almost as much as the design. It has been interesting to define what kind of categories to include. Some have come almost instinctively through the process of experiencing LEGO and writing up my experiences, others have required a lot of pondering. I don’t define categories lightly, because a category is not necessarily just a title, a search help – it also indirectly defines what this blog is about and may even foreshadow where my AFOL hobby is headed. I have spent considerable time thinking about how I want to categorize this blog – and thus, how to categorize my own LEGO hobby. I’m painfully aware I can’t experience and cover everything. I have to pick my bricks carefully.

First major design update came on August 15, 2012 when the Quest for Bricks logo and the “brick flow” banner were introduced. These replaced the old castle banner (otherwise the design remained as above):

September 1, 2012 brought along the first story grid. Prior to this, all blog posts appeared one after another, which had become hard to follow as the topics expanded:

At this point, blog categories had also expanded near their current form. Categories had been added on June 10, expanded and tuned on August 7 and 22 as well as September 14 and 23, 2012:

On November 21, the story grid was facelifted to a little sparser design (this design was streamlined on December 16, 2012 when the category menu was moved from top to bottom):

For (near) the one-year anniversary of the blog, the story grid was replaced by a story list design on March 16, 2013 to account for the lower posting volume. Note the blueish background that had by now replaced the original grey background:

And finally, on July 15, 2013, the current blog design with a featured article on the front page was adopted – also resurrecting the story grid, but in a smaller form: 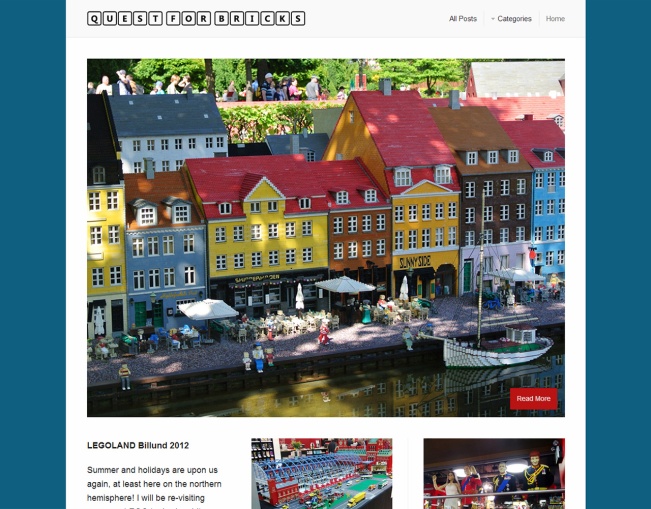 If there is any defining characteristic in this evolution, it must be the move from ornamental to simpler, more modern look – towards one that lets the stories, not the blog itself, pop out… a design suitable for the Scandinavian heritage of both LEGO and this blog. This is natural, of course, considering the original grey design was selected because of the Castle theme. At the same time, there has been a struggle to present the widening array of topics in a format suitable for both the stories and the posting frequency. I hope I have achieved some balance.

For the evolution of Quest for Bricks, there is also a separate blog category to follow.

2 Responses to Evolution of species