My pictures of LEGO from 1960s illustrated how the locking mechanism and structure of LEGO bricks was still evolving then. In addition to improving the product, apparently in those early days the LEGO Group (TLG) also intentionally patented (and shipped) several variations to keep copycats at bay. However, the evolution of LEGO bricks did not stop there, as I found out while resuming the 6080 King’s Castle project. 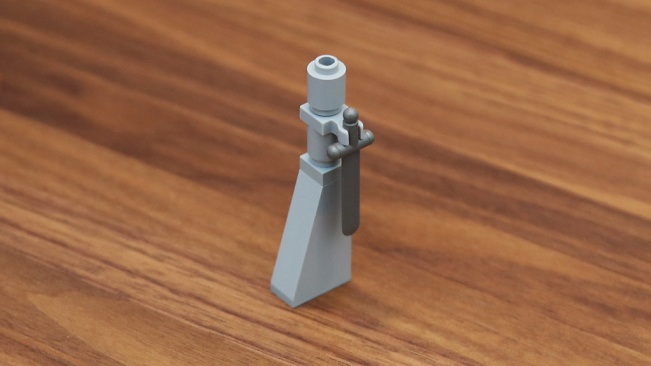 I was missing a piece or two from the castle’s rear sword stand, so again I turned to the Peeron part list for consultancy. One sword stand part, which I was not missing, was an old castle grey Plate 1 x 1 with Clip Vertical – Type 1 or as BrickLink calls it: Light Gray Plate, Modified 1 x 1 with Clip Vertical – Type 1 (thin open O clip). This is the thin 1×1 piece to which the sword attaches to. What piqued my interest was the Type 1 (thin open O clip) label. Is there more than one type?

It turns out, previously unknown to me, that there are four major variations of this very basic LEGO piece. Not just one, two or three, but four. Looking into this, I stumbled onto one more minor variation, the fifth, and also found two variations of the LEGO lamp holder plate, which is used in the portcullis and the drawbridge of the castle. Finally I came across two different variations of the old castle grey 1×6 brick – outwardly they look the same, but beneath their locking mechanisms are slightly different.

On the left (brick and color names here are in the BrickLink format, other than the further details in brackets):

On the bottom (note how the first two clips are of the same major type, but still contain visible structural differences):

On the top are two Light Gray Brick 1 x 6 bars, although their difference doesn’t seem to be cataloged anywhere I know – I’d wager generational variations only.

Roughly speaking, the thinner the piece, the older the design. From the looks of it TLG has mostly been improving the strength and locking of their bricks, the function of the parts has not really changed. The 6080 King’s Castle obviously uses old type 1 versions, and so will I as far as possible, although my Pick-a-Brick portcullis will include a type 2 lamp holder due to the use of new parts. I will let that be. By the way, the type 4 clip in the picture is borrowed from my son’s 21006 The White House (2o10).

These examples are not the only ones – BrickLink knows even more types of 1×6 bricks and at Peeron a search for Type 2 found 113 LEGO parts that have a variant!